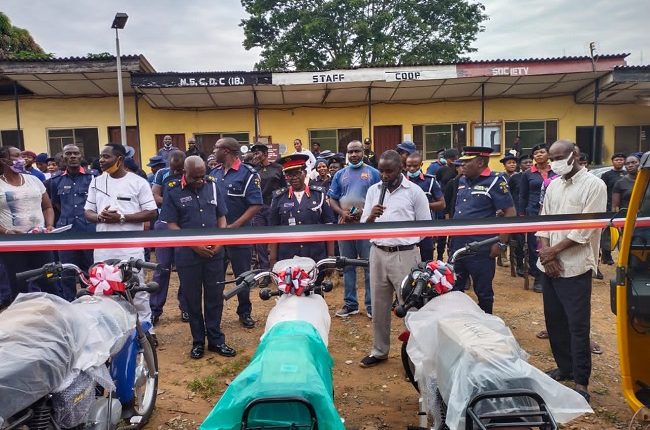 Oyo State Command of Nigeria Security and Civil Defence Corps (NSCDC), Michael Adaralewa, has assured the state residents of adequate security of lives and property in the remaining months of the year.

The Commandant gave the assurance on Monday during the handover of motorcycles and tricycles purchased by the Cooperative Society of the Corps to the beneficiaries at the command headquarters at Agodi GRA, Ibadan.

Speaking during the event, Commandant Adaralewa, who was represented by the second-in-command, Femi Ete, a Deputy Commandant, said that the state was relatively peaceful, as the level of crime had reduced drastically due to efforts of NSCDC and sister agencies in the state.

He made it known that in terms of arrests and the number of matters treated in the course of the year, 315 cases, including rape, domestic violence, child trafficking, molestation, child abandonment, and child slavery, had been handled by the anti-human trafficking and child protection unit.

He added that the Peace and Conflict Resolution Unit had also settled over 500 cases within the calendar year, which included tenancy, land dispute, family crisis, farmers and herders crisis and other domestic cases, among willing family members.

Adaralewa further spoke on how the command’s Agro Rangers team had been able to mediate successfully among farmers and herders this year.

However, he warned those fomenting troubles at Olugbade Village in Iseyin and Oriire Local Government Area to desist, as the Command would deal with anyone attempting to breach the peace of the state.

In his remarks, the President of the cooperative society, Kayode Adebayo, a Deputy Superintendent, appealed to its members to be dedicated to duty, as the executive would not relent in giving support and assistance to members, for them to give their families the best.